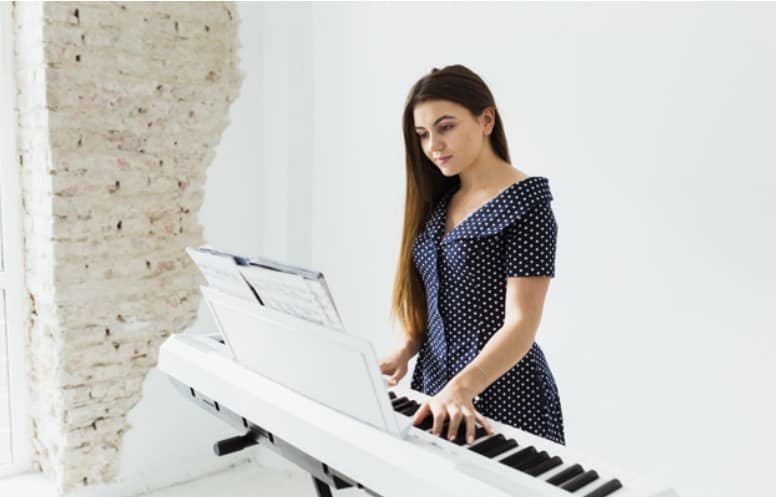 Are you ready to start playing some sweet tunes on your keyboard? The easiest way to do this is by learning chords. Chords are present in almost every single song and are, therefore, a way to start making music.

This article talks about the different piano chords and how you can play them! We also included several charts. So if you can, try to follow by playing these basic piano chords on your piano or keyboard.

What are Piano Chords?

Chords (1) are created by playing more than one note at the same time. They are used in different instruments and are used to define the harmony of a song. Some chords are complicated, but simple piano chords can be fun and exciting to learn for beginners.

Chords are often three notes played at the same time. However, some musicians use broken chords also known as an arpeggio. Broken chords or Arpeggio is when the notes in a chord are played one after the other instead of simultaneously.

This type of chords is common in many types of music, especially pop.

The most common type of chords is called a triad. These are chords composed of three distinct notes:

However, chords can have more than three notes. These are called extended chords, added tone chords, and tone clusters. These types of chords are often used in contemporary classical and jazz music. A series of chords is called a chord progression.

The Most Common Piano Chords for Beginners

There are thousands of chords that you can play on any instrument. However, some chords are more popular than others. These chords are the ones you often hear when you listen to your favorite songs. Let us take a look at the most common piano chords:

If you are not sure how to play these notes on the piano, here is a visual guide: 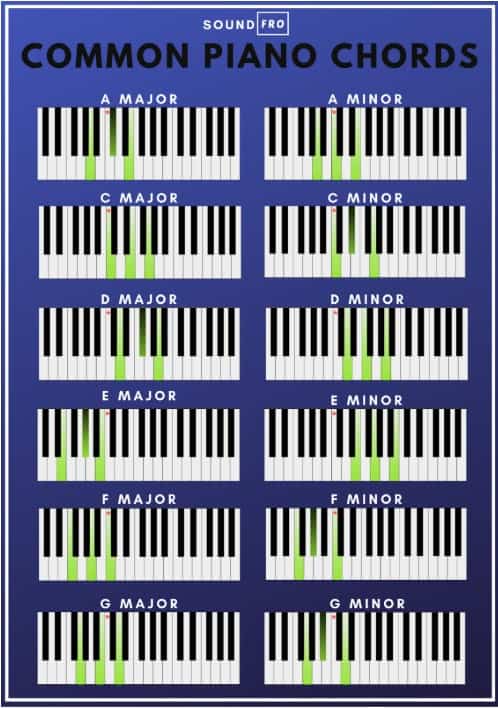 Before we delve deeper into other types of chords, first, let us go over a brief explanation about piano keys and intervals.

Take a look at this image below:

This is a labeled photo of piano keyboard keys. Consider it as a pattern. The same pattern repeats over and over throughout the entire piano. Once you memorize this, it will be much easier to memorize every key of the piano.

The distance between piano notes is called an interval. Intervals are measured in half-steps and whole steps. 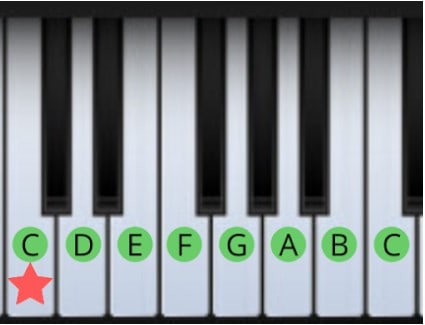 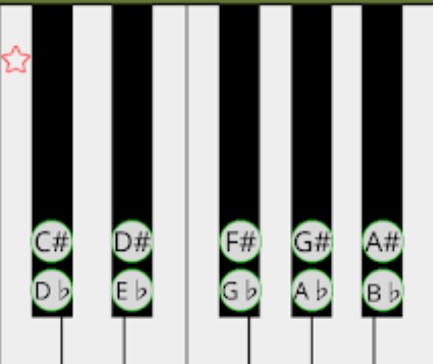 A major chord is the most common triad. It is versatile which makes it a perfect introduction to chords, especially for beginners. Major chords are used in every pop or rock song! Try listening to The Beatles’ Let It Be. The very first chord in the song is a C Major.

Here is a handy list of the most common major chords:

If you have trouble playing these chords on your own piano keyboard, here is a visual representation:

Major chord intervals are called “major third” and “perfect fifth”. To find the intervals on a major scale, all you need to do is count three and a half steps or seven half steps.

Similar to Major chords, a minor chord is also a triad which means it is composed of three notes. Most songs are created with a mixture of both major and minor chords.

Here are the most common minor chords:

If you have trouble playing these chords on your own piano keyboard, here is a visual representation:

Minor chord intervals are called “minor third” and “perfect fifth”.  An example of a song that begins with a minor chord is Pink Floyd’s Comfortably Numb.

Unlike Major and Minor chords, Augmented piano chords are less often used in pop and rock music but more as a transitional chord. If you listen to the pre-chorus of Roy Orbison’s song “Crying”, you will be able to hear how an augmented chord is used for transition.

Here is a handy list of the most common augmented piano chords:

As you can see, this seems a bit more complicated than the Major and Minor chords. No worries, though, as here is a visual representation of the notes. You can use this as a reference so you can play them on your own piano keyboard:

Augmented chords use a major third as well as a raised or “augmented” fifth. For an augmented fifth, the interval is 4 whole steps or 8 half steps from the root note.

If you are having trouble finding these notes on your keyboard, here is a visual representation of the notes. You can use them for reference if you would like to hear what a certain diminished chord sounds like on your piano keyboard: 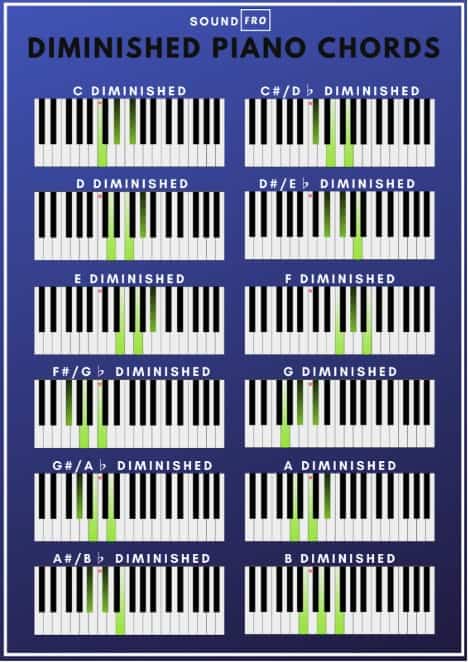 Now that you have an idea about basic piano chords used in music, you can start learning how to play them. What is great about learning these chords is that they will surely help you get ready for your next music lessons. Because these chords are commonly used in pop and rock music, you can certainly use them to learn your favorite songs–or even make your own!

Want to learn more about the piano? Learn the complete keyboard diagram. You may also check out the best piano lessons online and learn how to read sheet music notes. 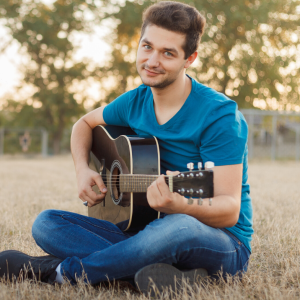 PrevPrevious30 Easy Pop & Classical Piano Songs Beginners Should Learn In 2021!
Next11+ Easy Songs to Play on Drums for Beginners (For All Musical Tastes)Next